We all know that termites make their nests in mud mounds. We see them in Melbourne’s suburbs all the time, right? Well actually, we have never seen a termite mound in Melbourne, even though our termite specialist company treats thousands of infestations. So, what’s the story?

I shall paint you a non-scientific image using brazen over generalizations – but the picture that you see may hopefully be realistic and helpful.

This is the home of Coptotermes acinaciformis- the most damaging species in Australia. They live in large colonies of up to a million individuals, and we believe they can have links with sister colonies nearby. This means that if we destroy a colony by poisoning the Queen, it is not unusual for them to bounce back a year or two later, possibly led by the sister Queen.

These termites are aggressive and tend to be messy with copious amounts of moisture and mud being introduced into infested buildings- which can fortunately give away their presence to the building owner.

So where is their mound? Well, probably before Melbourne was urbanised, they lived in large and very obvious mud mounds – which they still do further North and around Sydney. However, Melbournians have not liked sharing their back yards with these termites and the mud mounds have been managed away. Our company only rarely locates their nests, but we think they locate their mound under the ground, often within a large building cavity. For instance, within a suspended concrete patio or step- often right by the front door. We also notice high infestation rates near train stations, where the raised concrete platforms provide huge nesting opportunities and track sleepers provide the food.

The Eastern suburbs, Yarra valley and the Dandenongs

These suburbs typically have mature eucalyptus trees in gardens, nature strips and reserves, and these trees are the home of another Coptotermes species, Cops’ frenchi. Again, they have large nests in a mud mound – but the mounds are built inside larger tree trunks, which the termites hollow out. The mud mound is then built inside the trunk, usually just above ground level. There is often no external evidence of the nest which can go undetected for years- even if only a few meters from a busy family home.

This species is slightly smaller and less aggressive than it’s infamous sister (above mentioned) but it certainly makes up for this by being discrete and covert so that their damage may go unnoticed until major damage occurs. It seems that this species is a ‘single nester’ without sister queens, and our company has for many years had great success in poisoning the queen with only a slim chance of colony rebuilding.
Where are the nests? Inside larger Eucalypt trunks. We drill and test with a temperature probe. Common host trees – E. goniocalyx, E. macrorhyncha, E. viminalis, E. nicholii. 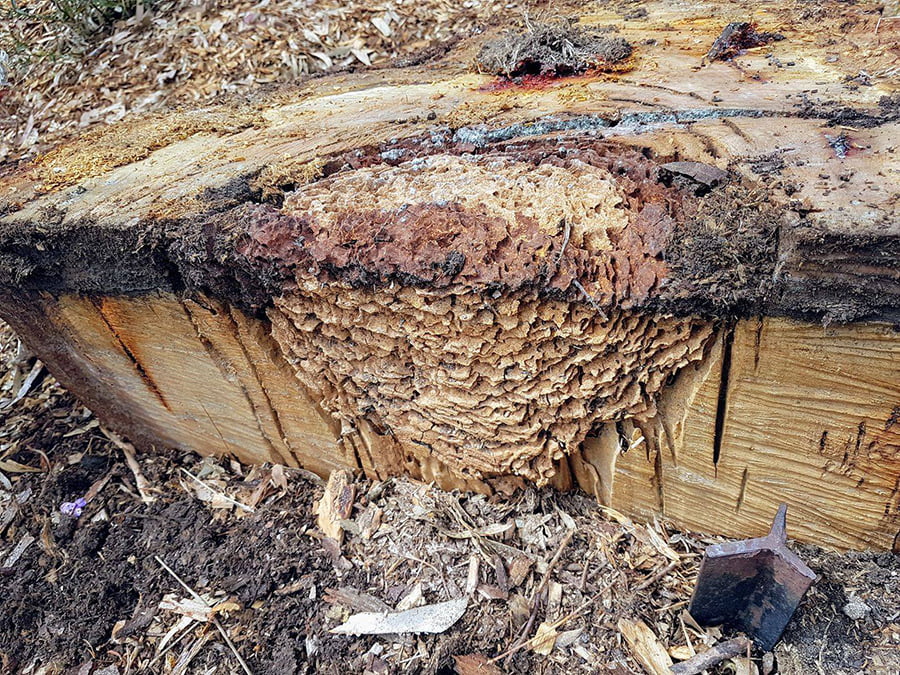 Is that it? Well, yes. The above two species cause virtually all the termite damage in Melbourne.

However, there re a couple of other species that you may come across in your garden or out in the bush-

Builds large and hard mud mounds in the colder wetter forests of Southern Victoria, such as around Baw Baw, Noojee and Walhalla. They have the same formidable appearance as their infamous Coptotermes sisters, but are not generally considered to be a risk to buildings. There isn’t good information on this, and personally I don’t see why they would be all that good at distinguishing a timber house from a tree. This genus includes dozens of species which range right around Australia and are difficult (for a mere pest controller) to tell apart. However, the following is a practical account of their occurrence in and around Melbourne.

Nasutitermes are generally characterised by their easily recognised blackish / very dark brown colouring, especially of their mudworkings. An accurate I.D. of the Genus is simple if live termites are found.

How? – Find a soldier termite. These are a little smaller than the workers and have a black or dark brown head. Now have a close look at the head. If it has a ‘birds beak’ type nose, then it is a Nasutitermes. Virtually all other Genera have soldiers with a pair of ‘tweezers’ for jaws.

These termites commonly are seen in the following situations-

It is common to see their black mudding on sleeper garden retaining walls right across Melbourne. Colony nests are typically the shape and size of a footy ball and are located within the larger hardwood landscaping timbers- not in trees. They prefer a damp environment. We occasionally find them infesting a building, where they may cause local damage to larger hardwood timbers. They occasionally occupy the workings within a building made by a prior infestation by Coptotermes.

Soft mud mounds in central Victoria. Head up North from Melbourne across the dividing range, into the dryer country perhaps around Broadford, Kilmore, Seymore and Bendigo, and we find small soft mud mounds, often quite numerous in some areas. These typically contain small colonies of Nasutitermes exiteosis. These termites show a willingness to come out into the open to travel in plain air, being protected from desiccation by their highly pigmented and hardened skin. They may attack buildings, and this risk increases the further North we go. They are a real problem in Sydney.