We’ve spent a lot of time talking about how to eradicate termites from your home, but not a lot of time explaining what drives these little creatures to attack and how it’s even possible for them to eat away your greatest asset.
Here’s some information from the Victorian Department of Human Services that we thought you might find interesting!

“Termites”, Department of Human Services
Termites belong to the insect order Isoptera, meaning ‘equal wings’. Winged termites have four wings equal in size and shape. Termites are often wrongly referred to as white ants; however, as they are neither white, nor ants, this term should not be used. Termites are in fact, closely related to cockroaches. The digestive system of termites contains a variety of micro-organisms which assist in the digestion of the plant fibre cellulose. Over 350 species of termites are found in Australia, of which only approximately 20 commonly cause damage to buildings, 5 in Victoria alone. Although termites are generally considered to be destructive timber pests, they play important ecological roles, providing nest holes for lizards, birds and possums, assisting in the breakdown of organic matter, returning nutrients to soil, and assisting with soil aeration.

Termites are social insects, living and working together within nests or colonies of various sizes. Termites take several different forms. Each form, or caste, has different functions to perform within the colony. They communicate by smell and touch.

Alates, meaning ‘winged ones’, are the true adult termites. They have eyes, wings, darker colouring and are fertile. Their wings are twice the length of their body and are shed after he colonising flight is made. Shed wings are a good indication of termite presence.

The reproductives live in a central chamber in the nest where the female, or “Queen”, will lay many thousands of eggs each year over her life span of approximately 10 years. The male, or “King”, is responsible for fertilising the Queen. The reproductives exist as one of two possible forms. The macropterous King and Queen made the colonising flight as alates and established a new colony after they shed their wings. A macropterous reproductive can therefore be identified by the presence of retained wing bases (little triangular stubs on the thorax).

The supplementary reproductives occur as a result of the death or deterioration of the macropterous reproductives. Supplementaries arise from among the younger, wingless reproductives developing within the colony, therefore lack any evidence of wing bases.

Soldiers have darker, larger heads than the other castes. They are blind, wingless, and have undeveloped reproductive organs. Soldiers are tougher than the other castes and take longer to die from most toxins, exposure, or starvation. It is their responsibility to defend the colony, if disturbed, while the damage is repaired by the workers. Soldiers exist in different forms. Most species have mandibulate soldiers, with well developed jaws used to crush attackers, such as ants.Nastute soldiers occur in Nasustitermes species and are only rarely found in Victoria. They have a snout from which they eject a sticky solution which irritates and glues attackers. Phragmotic soldiers have a very large head which can be wedged in tunnels to block attackers.

The workers account for the largest number of termites within the colony and are therefore responsible for the most damage. They are responsible for gathering food, grooming other termites, constructing tunnels and repairing damage, in addition to tending to the Kings, Queens, and their young. These termites are believed to work 24 hours a day throughout their 4-year life span. Worker termites are generally unpigmented. They are blind, wingless and have undeveloped reproductive organs.

Termites hatch from eggs that have been tended by their nest mates in specially Constructed nurseries. As soon as they are old enough, the young work within the colony where jobs change with age and maturity.

Once a single colony becomes sufficiently large it produces winged reproductives which wait in specially constructed chambers until ready to leave the nest and undertake a colonising flight. They leave the nest as a swarm under conditions of high humidity, still air, and low light. Termites are not strong fliers and usually only fly up to 1km, although breezes and updrafts can carry them a lot further. Upon landing near a suitable nest site, the female emits a calling scent and males quickly respond. She selects a nesting site and excavates a chamber in which she and her chosen King mate and take care of their young until the workers develop and take over.New colonies are sometimes established via budding. This is believed to occur when the extremities of the colony lose contact and become independent. The Primary King and Queen are believed to emit hormones which suppress the sexual development of rest of the colony, however this control breaks down if the territory is too large or contact with groups is lost.

The conditions maintained within a termite colony are such that the termites are not normally at risk of moisture loss as a result of the exposure of their soft, thin cuticle to a harsh dry external environment. The temperature within the nursery of a large nest ranges between 10` C and 35` C but rarely varies more than one degree a day. The relative humidity is approximately 100%. The moisture required to maintain the temperature and humidity is obtained from the soil, leaking plumbing or decaying timber.

The lifecycle of a termite consists of four stages of development with young termites developing into four different castes. The temperature, food quality, and activity of the colony affects the interval over which termites develop from egg to adult. Termites develop by moulting or shedding their outer cuticle once a growth period ceases. The Queen adds a new set of ovaries at each moult so that her abdomen eventually becomes quite large, a condition referred to as physogastry. Shortages of a particular caste create a hormonal imbalance within the colony. This is then corrected by the development of more young termites into that caste.

It is important to correctly identify the type of pest termite before beginning treatment as the location of the nest and other habits of the colony will indicate the most appropriate method. As the soldiers of each colony possess such prominent features the termite species is most easily identified by examination of an individual of this caste.

This genus of termites is widely distributed throughout Victoria. They are responsible for more than 80% of the termite damage caused to buildings. Coptotermes build nests in trees, favouring eucalypts, stumps, under concrete flooring, in wall cavities, or enclosed verandas. More than a million termites may be present within a single colony; however, half a million is a more commonly encountered maximum size. These termites usually travel at least 50m from the colony in search of food via a series of underground tunnels.Coptotermes acinaciformis tend to recruit strongly to new food sources and respond strongly to baits. Coptotermes frenchi tend to explore widely for new food sources and often feed lightly at multiple points. They respond much less strongly to baits. The soldier caste of Coptotermes is mandibulate with simple brown saber-like jaws. Soldiers measure between 3.5mm and 6.5mm in length. When disturbed these soldiers eject a white rubbery glue-like substance from their pear shaped heads as a defence mechanism.

The Nasutitermes are widely distributed throughout Australia, however, these species are of minor importance in Victoria. Nasutitermes exitiosus is common north of the divide. They construct dark, thin-walled mound nests between 30cm and 75cm above ground. These mounds are generally up to 1m in diameter. The nasute soldiers of this genus are easily identified, particularly as they tend to appear when tunnels are damaged, rather than hiding inside like other pest types.

This species of dampwood termite is commonly found nesting in large pieces of timber, particularly older trees, and is most common in mountainous areas. However, Porotermes are also commonly found in the dry foothills of Melbourne. Porotermes are much larger than the other pest species, but tend to live in smaller colonies and do not construct shelter tubes or travel far underground. The colony will often die once discovered and dried, although remedial timber preservatives such as boron salts are often used to ensure control.

This genus occurs throughout Australia but is only found in the north of Victoria. Schedorhinotermes are destructive and relatively nomadic, rather than maintaining a fixed central nest. A mature colony of Schedorhinotermes will have mandibulate soldiers of two distinct sizes, referred to as ‘major’ and ‘minor’. The major soldiers are up to 5.6mm in length while the minor soldiers are only 3.6mm. The absence of major soldiers indicates that the colony is either weak or young

Heterotermes are widely distributed throughout Australia, however, they are not considered to be a major pest species except in the Northern Territory. The small colonies attack fence posts, timber flooring, and paling fences within a small radius of the nest.

Heterotermes ferox specialize in feeding on small timbers on the soil surface and as a result are very commonly found. The soldiers of this species are up to 4.75mm in length with long, dark jaws and distinctly long parallel-sided heads.

Copies of the Pest Control Technical Notes can be obtained from the pest control website at: www.health.vic.gov.au/pestcontrol or by calling the Department of Human Services on (03) 9637 4156. 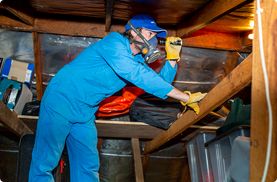 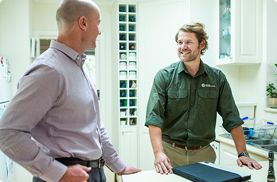