Our client in Seaford, on the Mornington peninsula, opened a box of old books that had been stored since they moved from their last house. He was surprised to see what he had found…have a look at the photo below! The box had been stored under the house and was sitting directly on the soil. Well, their local termite Coptotermes acinaciformis took a keen interest in this reading matter. In particular, the termites mistook the cellulose in the paper of the book as being cellulose from a tree. This is an easy mistake to make because, of course, they are actually the same thing.

As a termite treatment specialist, I see examples of stored goods that are destroyed by termites. This is mostly because they were stored directly on the soil under a house. I had a perfectly sound looking cricket bat, that was stored under a house in Frankston at the time the kids were growing up. By the time the grandchildren came along, the cricket bat was fished out from under the floor. This astonished the entire family as it now was as light as a feather- all the wood was eaten by termites leaving only the (undamaged) outer skin of wood.

It was a bit wrinkled with dryness, but without a single hole or any dust or dirt. It is worth noting, that the actual entry point, where the termites march in and out in columns, was no bigger than a pencil thickness. Have a look for yourself in this photo below.

You may also like the photo of the hammer which was again stored in a box on the ground under a house in Mount Eliza on the Mornington peninsula. It was stored together with other tools, books and clothing. This was a similar occasion where the hammer looked fine until it was picked up! The wooden handle was as light as a feather and the steel head just fell off.

As a termite inspector in Melbourne, there are many stories I could tell you, including one of an expensive violin destroyed by termites. The violin was stored inside a cupboard inside a house that became infested by termites. It is safe to say that this client, who lives in Mount Martha, did not have a good day. She not only lost her expensive violin, but she also realised that her home was being badly attacked by termites. I was able to give her some peace of mind by assuring her that I could kill all her termites by implementing termite removal and treatment strategies. All this would be with little hassle!

How, you may ask? Well, because there were a few beautifully active and undisturbed spots in her house where I could set up termite baits. We only need to get feeding going in such situations as termite baits are very effective. 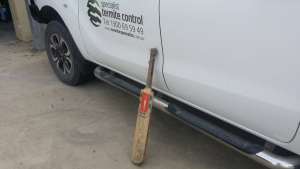 Get a Free Termite Assessment today.